Subsequent to LIVEWIRE, where I reported on the local NYC underground performance art scene, now as Yannanda The One That Speaks With The Stars, I will decipher the Universe one shadowy layer at a time! @JanaAstanov

The Great Mother, personified by the Moon, is eclipsing the Sun on January 5th at 8:28pm Eastern Time (January 6th 1:28 UTC), overshadowing the Capricorn’s business as usual with Cancerian longing for family’s warmth, and a hint of magic from the sextile with Neptune in Pisces. Moon, Sun, Pluto and Saturn create stellium, opposing the North Node in Cancer. Feelings of restriction and limitation will resurface, making us realize that we need to change structures that outlived their purpose. The essence of this eclipse is to transform the shadow within our psyche, surrounding the themes of emotional comfort, family, children and home.

“Sounds like the perfect moment to end the wall nonsense and stop imprisonment of immigrant children! The only way to overcome the recent hijacking of the executive branch, is to repudiate the US Government shutdown, by building bridges and not walls.” says Mary Kosciuszko, presidential candidate 2020, with her prophetic campaign slogan “Building Bridges”. 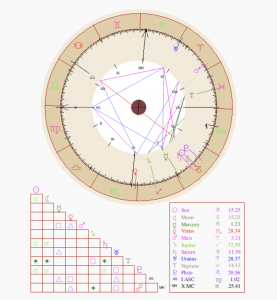 What is a Solar Eclipse?

A Solar Eclipse can only occur on the New Moon (Sun Moon conjunction) when the Moon comes between the Sun and the Earth. If the Moon’s shadow falls upon Earth’s surface at that time, part or all of the Sun’s disk is covered or ‘eclipsed’ by the Moon.  In mundane astrology, which predicts world affairs and events, the Sun represents the leaders, the Moon rules the people – the general population, the common person and its position in a chart will often indicate upon what the public’s attention is focused. With a Solar Eclipse the people overshadow the leaders!

Saturn and Pluto are cold and limiting. Now they met in the middle of the winter, in the sign of calculative and ambitious Capricorn, their structures oppress, their presence puts everyone down, and thus these two will use the whole arsenal of astral weaponry to make us feel irrelevant: Saturn will instill inferiority complex and Pluto will use cruelty. Stella of Sun, Moon, Saturn and Pluto is in opposition to The North Node conjunct the 4th of July,  America’s Birthday! What does it mean for the kids imprisoned on the US border? Will they be relocated to Florida, where the camps are larger and better, or will the democratic majority finally put the end to this all?! The greatness of the empire should be defined by how it treats its citizens and not by the expansion of its corporate interests. This Solar Eclipse is an opportunity to redefine American values that will culminate when Saturn and Pluto conjunct on 12th January in 2020 within 22nd degree of Capricorn.

If your birthday, like the USA, is on any of the following dates, you will experience this eclipse with more intensity:
December 31 to January 10
March 31 to April 10
July 3 to 13
October 3 to 13

To feel into the Neptunian sextile of this eclipse, read the interview with Jodie Lyn-Kee-Chow: https://www.3ammagazine.com/3am/multicultural-patterns/ while listening to the recording from the space flights of Voyager I & II launched in 1977.

Written By
Jana Astanov
More from Jana Astanov
by Agni Jnana Yannanda THE ORIGINS OF THE ECLIPSES Churning of the...
Read More